We started our day in Ashington, a quaint village in Northumberland. The sun began to shy away and we were greeted with hail, snow and sleet - what a combination!

In an attempt to find a hot drink before making our way to the field, we stumbled across 'Carr's Corner'. The compact corner shop was packed with workmen bustling for their breakfast rolls. We got chatting to a guy who was local and had also helped with the DIY SOS project. He walked us down to the field with friendly northern chatter along the way.

We walked past the house, and round to a large muddy field full of workmen. We noticed the iconic purple DIY SOS tent, and got signed in. The next few hours were spent moving inside and outside of the marquee, dependant on the great British weather! We met several friendly faces, and soon realised the majority of people involved were local - unlike us!

Minutes after they announced hot drinks, we had to gather together to be filmed by the drone. It looked like a gigantic school trip but with more hi-vis than usual. We all made our way from the field to the back garden of the house. Nick Knowles himself stood on a stool and introduced us to the house we'd all helped renovate.

It was then we were told that unfortunately two members of the family had come down with Covid, meaning the usual way of filming the big reveal was no longer viable. Luckily, the son, Gus, filmed the family's reaction on his phone - so we still got to see the moment the family saw their new home.

We heard from the family directly how this project has changed their lives. They had to speak through a speaker, due to the covid restrictions, but the message was crystal clear. We had played a part in transforming a building into a home for a family of four generations. It felt good to be a part of something that would make a real difference to someone's life.

Their flooring before the project was uneven, which made it difficult for Bobbie with her complex health issues, as well as mum Mary who is still suffering the effects of a stroke in 2013. We provided the Barlinek Oak St Lucia floor, which was installed throughout the downstairs including the hallway, kitchen and living room giving the family a hard-wearing even floor throughout the downstairs of their home.

We finished off the day filming the iconic starting scene, where Nick welcomes the audience to the episode and all of the workmen and suppliers cheer. We then got to meet the DIY SOS team themselves, which was really memorable. On the way out, we managed to snap a picture through the window of the floor.

After a long couple of days of travelling and wacky weather conditions, we headed back to Norfolk. We may have left them up North, but we'll always remember the Owen family and we hope their new floor and home provide stability and comfort for years to come. 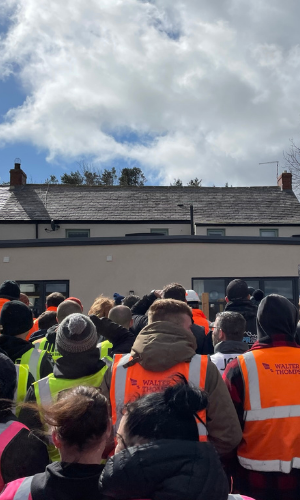 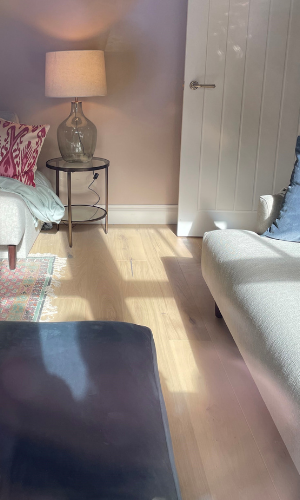